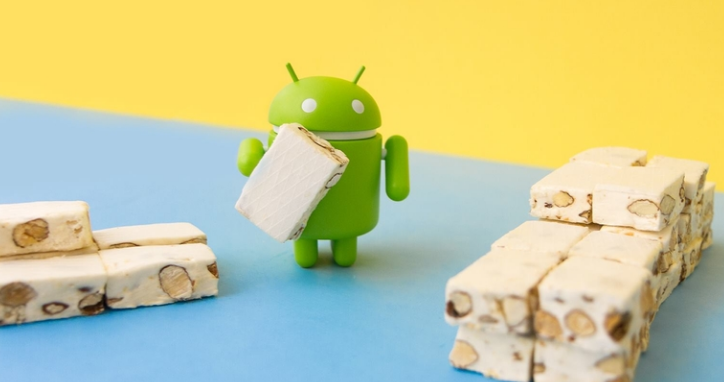 Did you guess that right? I didn’t, I was in favor of it being one of my most favorite Nutella. After an extensive amount time taken and the path breaking way followed to come up with the official name of Android N, the version’s latest alias has finally been revealed. Yes we are talking about latest release of the Android operating system for mobile & Tablet from Google which is Android Nougat.

Google has been releasing a little enhanced version of Android consistently, but this time it has buckled down to make the difference. Android Nougat is the latest version of Android, introducing remarkable features that makes the experience of using your Smartphone exceptional. It features to provide longer battery life, enhanced multitasking ability and smarter notifications giving a refined Android experience. Google has named its Android OS updates after sweet treats, and in alphabetical order. So far we’ve had Cupcake, Donut, Eclair, Froyo, Gingerbread, Honeycomb, Ice Cream Sandwich, Jelly Bean, KitKat, Lollipop and Marshmallow.

Android N are also focused on business client, consistently maintaining an interesting array of updates and innovation to it’s technology ecosystem. Giving more approaches to tweak your phone is somewhat of a major deal, Android has been leading this path since the very beginning and with Android Nougat you’ll have considerably more approaches to make your phone – your own. Whether you’re answering to work emails or making plans with friends, Android Nougat helps you multitask easily with new components. Meeting the standards, Android is equipped with effective layers of security and encryption to keep your private information safe.

While there are plenty of elements that have been presented with Android N, we are explaining some portion of the significant features in it.

Quick Settings gives you simple access to things like Bluetooth, WiFi and also the utility features like flashlight. With Android Nougat, you can really control what tiles go where, and move them around to fit according to your needs. For instance, if you more often use WiFi than the Airplane Mode, the WiFi icon gets boosted to be the top amongst the five icons along theof the initial quick settings over the supported devices. The Airplane mode icon can moved over to the second swipe menu.

Applications can tailor their content based on your location, the region settings. So, for example, if you speak multiple languages, then search can demonstrate results in each of those languages.

This element will permit you to run two applications sharing the same screen side by side. The windows are resizable as well just by dragging the divider. The Multi-window support could expand enterprise interest in Android tablets. Multi-window mode is really savvy when it comes to the keyboard. If you have two equally-spaced windows up and you need to type into one window, for example a URL or search term, the windows will automatically resize to adjust the keyboard and then automatically return back when the keyboard is turned off.

Reply directly to notifications without opening any application. You won’t need to navigate far from your present window just to answer an approaching message. You can simply answer within the notification that shows at the top of the screen. It’s an incredible feature and one that will spare you a lot of time and endless app switching.

Games will now leap to life because of fast, cutting edge design and which is empowered by your device’s multi-core processor. VulkanTM improves game experience when used with the multi-core processors for gaming and other comparative applications, by this we can expect an execution boost over time. Game developers can just look over the higher execution and multifaceted nature of VulkanTM which is less in demand currently but once in use, the standards of Vulkan is not highly intense making it less complicated when in use. It’s a win-win for gamers and developers alike, regardless of the fact that Vulkan will take a while to spread.

With Android N you won’t need to hold up while your device installs the update and improves all your applications for the new version. Also, for current Android N supported devices, software updates will now be installed quickly, so you won’t have to wait for minutes while your device reboots. Once an update has been downloaded in the background, whenever you restart your phone, the system will switch segments and you’ll immediately have the new Android updates without going through the standard download, reboot and install process.

Android Nougat can now better confine and secure records for individual users on your device. Currently there is a clear distinction between device-encrypted content and file-encrypted content. During the process of software update, Android N keeps your own data better secured while value addition is done to the existing system data.

Direct Boot helps your gadget startup faster, and applications run safely even before you unlock your device when your device reboots. Imagine that your phone haphazardly reboots without you knowing and you then miss an alarm and few imperative notifications? All these situations considered, Nougat will now boot entirely in the locked screen not requiring a PIN or pattern unlock to decrypt, permitting to select data in encrypted device.

There are presently more than 1,500 diverse emoji incorporated with Android, including 72 new ones, which include a clown face, bacon and a facepalm. It’s a great way to express yourself by using this feature.

Android N is a radical change in the world of operating system and its version. Looking at affection of users towards Android OS, it is desirable to go for Android Application Development  for your business. Android has a wide spread market and gives a chance to connect millions of global users in one go. With a well-built application, you can significantly expand & add revenue to your business. Most prominent advantage that start-ups can avail from Android N is that it can encourage the User to use the android apps which will be providing better & innovative functionality, helping them to connect well with the business.