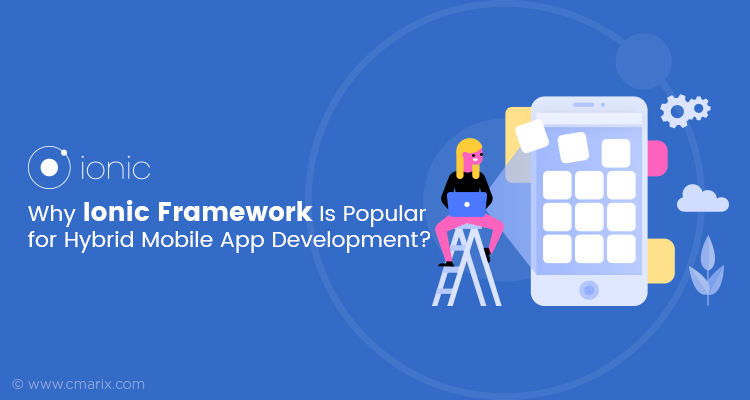 Why Ionic Framework Is Popular for Hybrid Mobile App Development?

If you have been into the field of mobile app development for some time, you must have known how user interface has constantly been in the focus. When it is about delivering outstanding value in the mobile app UI, there are not too many great framework choices for cross-platform app development as the Ionic.

Here through the length of this post, we are going to explain the key strengths of the Ionic framework and how it excels in building robust and performance driven apps with the sophisticated user interface.

What Is Ionic Framework?

Ionic is basically a framework created expressly for building sophisticated and powerful mobile user interface. The Ionic app development framework built with HTML, CSS, and JavaScript comes with a great command-line interface (CLI) making the developer’s job easier and bringing down the learning curve significantly. The framework also comes with additional services such as Ionic View and Ionic Creator.

Ionic, unlike many other JavaScript frameworks, brings together the goodness of several technologies. While the top layer of an ionic application holds the core capabilities of the framework in creating an easy interface, the other layers of the application work with different technologies. Angular below the top layer works as a web framework while the Apache Cordova down under helps to utilize the native capabilities. Thus Ionic comes as a mobile app development framework capable to deliver a great user interface and hybrid apps with robust native capabilities as well as web view.

As we have explained already, by bringing together several technologies Ionic helps to build robust hybrid mobile apps superb in engaging native device functions and web-based interactions. On top of all these, Ionic delivers fluid, easy to use and thoroughly engaging user interface. Faster development also ensures lowering the app development cost to a great extent. All these contribute to the popularity of Ionic as a great hybrid app development framework. Three aspects that contribute to the popularity of Ionic are these:

There are several other reasons that make Ionic popular as a mobile development framework. Let us explain some of these reasons.

Ionic from the early era became a popular framework because of its focus on performance. The latest Ionic 3 version has everything that developers require in a hybrid development framework. Ionic apps are now also geared to perform great irrespective of the device it is used in.

Ionic View working much in the fashion of TestFlight of Apple allows developers uploading the app to the server before launching the app. This makes evaluating the performance of the app better.

Ionic comes with an array of appealing and robust mobile components ranging from sophisticated themes, typefaces and interactive elements to ensure a visually appealing and engaging interface for any app.

Ionic also carries the power of Angular delivering an array of reach features and versatile plugins Angular is known for.

The Place Of Ionic In The Comparative Landscape Of Mobile Solutions

The downside of native development is that you cannot reuse the code of the native applications you have built for another platform. That is where frameworks like Ionic can help. It can help to build hybrid applications with native functions while allowing every platform specific functions to be available.

Web apps experienced popularity as third-party applications accessible on the browser just because of the wider reach beyond the so-called mobile platforms. Mobile web apps are still a great choice to reach a wider audience.

But in spite of these advantages, the mobile applications always miss establishing a close relation enjoyed by the native users. The reliance on one and only web browser makes web applications a tough proposition for most businesses that want to build a day-in and day-out relation with the user. The inbuilt capability of Angular allows Ionic to perform like a single page web app with all the functions.

A hybrid application brings together the best of both native and web applications and helps to solve the limitations of both categories of apps. The biggest advantage of the hybrid application is that the majority of the code used in building the app can be reused for apps for different platforms. While the hybrid apps use common code base the additional functions can be brought in through plugins.

Ionic framework typically fits into this type of app development most. It is the framework that holds together all the characteristics of hybrid development allowing building apps with the common code base and allowing full access to native functions.

Do you want to build a robust hybrid application using Ionic? Looking for a proficient hire Ionic app developers who knows how to leverage the framework benefits completely for your new app? Work with CMARIX Technolabs & meet the most experienced and expertise-driven Ionic development team. All you need to do is email us at [email protected] or if you find that boring you can fill the inquiry form and we will reach you at the earliest.