Know how Angular 2 is different from AngularJS 1.x 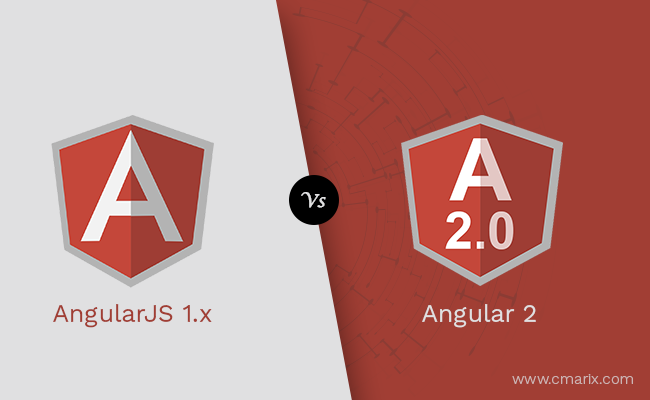 With immense transformation taking place into front-end technologies, cutting edge websites as well as single page applications have AngularJS as their inevitable component. AngularJS is a structural framework that can be of assistance in using Single Page HTML for declaring dynamic views in web-applications. Put differently, this is a framework that extends HTML’s syntax with a specific end goal so that your application’s components can be expressed clearly and precisely. The latest version of Angular 2 provides many benefits over AngularJS 1.x including dramatically better performance, more effective templating, lazy loading, simpler APIs, easier debugging and much more. Around 1.3 million Web developers are using AngularJS all over the world. Latest version Angular 2 is being used by 300 thousand users.

Angular 2 is a next version of Google’s massively popular MV* framework for building complex applications for Web & Mobile. Along with TypeScript, Angular 2 is introducing true principles of object-oriented paradigm into the mainstream programming world. It conveys incredible improvement in rendering performance. Rendering module is located in a different module which makes easier to reuse the code across different devices, providing great scalability. It essentially emphasizes the separation of concerns throughout a given system. It is a flexible framework, a more improved version of Angular 1.X, that allows the development of complex applications which are very easy to maintain and increase their productivity.

Benefits of Angular 2 over Angular 1.x

Current AngularJS 1.x has issues like the execution of minification and features basic to cutting-edge service side NET or Java frameworks. These issues are solved in Angular 2 with help of Dependency Injection. DI allows you to insert dependencies in different components in various parts over the applications without requiring any information on how those dependencies are created or what dependencies they require themselves. By this, you can evade tightly coupled components by injecting dependencies when required. As long as the implementations confirm to a standard protocol or rule, you can inject different implementations to a similar component. If you specify an argument of type Service in the Component constructor, Angular 2 will automatically instantiate and inject that service into the component. This facilitates the construction of object instances, as now you can give the required information to the DI library and let it handle the rest!

In Angular 2.0, when you compile a template, you are not only providing the compiler with a template, but you also providing a Component definition. Component definition contains metadata about what directives, filters, and much more were used in the template. This ensures that the necessary dependencies are loaded before the template gets processed by the compiler. As the code is based on the ES6 module spec, the provided module loader can now load dependencies by basically referencing them in the component definition. This component will additionally ease the coding as web developers now wouldn’t need to depend on manual template compilation whenever they make a small change.

Angular 2 uses the component based routing, which implies components themselves are agnostic of the routes and so can be utilized without considering of the routes. Routing is used to separate different parts of the application.

TypeScript is a superset of JavaScript that allows you to define new types. Declaring variables with types rather than the generic var opens the way to new tooling support, which you will find to be a great efficiency enhancer. It also provides advanced autocompletion, route, and refactoring. It comes with a static code analyzer, and as you enter the code in your TypeScript-aware IDE, you’re guided by context sensitive help recommending the accessible methods in the object or types of the function argument. If you incidentally use an incorrect type, the IDE will highlight the erroneous code.

Angular 2 is entirely component based. A component is an independent cohesive block of code which has the required logic, view, and data as one unit. In Angular 2, Component is a special kind of directive that uses a simpler configuration which is appropriate for a component-based application structure. Controllers and $scope are no longer used in Angular 2. They have been replaced by components and directives.

Angular 2 is to make the best possible set of tools for building web apps not constrained by maintaining backward compatibility with existing APIs. Web app development with a complex web stack featuring cutting edge and impressive toolings such as Webpack, Typescript and ES6 transpiling.

What Are The Differences?

Angular apps now respond to user input by using the event syntax. The event syntax is indicated by an action surrounded by parenthesis (event). You can also make element references accessible to different parts of the template as a local variable using the #var syntax.

Angular 2 is built around the concept of components, and all the more decisively, with the Web Components standard in mind. It takes full advantage of cutting edge Web programs and defaults to using the capabilities they offer to give you the best execution. It relies on the newest standards and allows you to logically design your application in components rather than controllers. It keeps your HTML clean  and enhances it semantically.