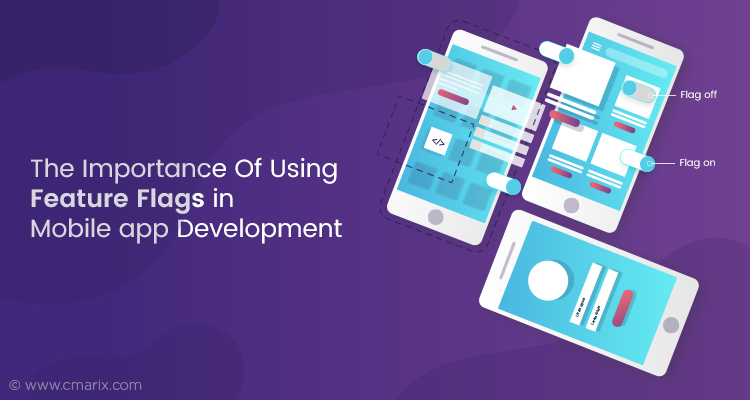 Feature Flags: The Ultimate Help for Mobile App Development and Release is Here

You have just launched your brand new mobile app and you are reasonably happy at least for arriving at the conclusive end of your development journey. Cheers! Wish you a big success in the App Store or Play Store.

But when the mirth subsides and before you enter into a complacent mood it is reasonable to ask whether you are sure about the app performance. Are you sure that the app just cannot crash because of a fatal bug that somehow slipped through the app testing process? Are you sure that the app UI is likely to be preferred by the majority of users? Remember, in case any of these negatives really come to be true, you lose the audience before they are not even properly settled with your app.

Or think of a future update. Suppose when the app was running quite smoothly you came out with a necessary update making positive changes to some features. If the update just unexpectedly disturbs the normal functioning of the app, do you have any precautionary measures to deal with such emergencies?

To help you remain in total control over all such contingencies and emergency situations, any mobile app development company needs to take help of the feature flags. Through feature flags, you can control different application features and performance parameters remotely. It is highly useful for developers to boost app performance, fine-tune the app from time to time, to help in app testing and for making the app better continuously.

Here through the length of this post, we are going to explain the definition of feature flags, its importance, the huge role it plays for the app development process, app testing and continuous development approach.

What is a feature flag?

A feature flag organises the app features into branches. The users while using the app based on context or some other parameter can go down one branch consisting of a set of features or can go down other branch holding together another set of features. This implies that the app user will either have access to one set of features or the other. The feature flag can also be used to make some features accessible to some pre-identified users while hiding the same features from others. Feature flag thus allows developers a lot of dynamic controls over the app features, UI and overall user experience attributes.

Some of the key and obvious ways feature flags benefit hybrid and native mobile apps include the following.

We will explain these immediate benefits along with a lot of other benefits and impacts of feature flag for mobile app development.

The Importance Of Feature Flag For Mobile App Release And Deployment

Feature flags play an important role in respect of launching an app. Getting your app approved by the App Store and the Play Store always remains a challenge. When you hire android app developers or take onboard top iOS/iPhone app development companies, you often seal the deal with an assurance of making your app live. The time taken for reviews and upgrades remains undiscussed. The entire waiting period till your app is approved slows down the development and deployment process. However committed you are, you cannot just implement the changes instantly.

Let’s break down the problem. The review process of the Apple App Store generally takes slightly more than a week which is not a short waiting period. Now developers after spending quite a time and effort in perfecting the app by internal reviews and testing look forward to unleashing the new features as soon as the app comes out live. But, in case if your app has one faulty feature or performance issue, you need to send an update and wait for another week or so again for the review. This review process may linger for as long as a fortnight or more before you actually see your app coming alive.

In case of upgrades, the app developers need to wait before the users decide to go for it. If you have come up with a better feature or new changes that make your app even more interesting through an upgrade, there is no guarantee that users are actually getting access to the improved app unless they decide to go for the upgraded version. So, making the fully featured app and the upgrades available depends on a variety of factors including the review process of the app stores and user acceptance.

Feature flags come as a solution to this issue concerning the deployment of the upgrades. Thanks to feature flags one can release features without really waiting for the approval of the app stores. As Feature Flags basically work with a real-time database enabling the upgrades and feature additions instantly, the changes and updates can be made instantly without needing to wait for the approval process to complete.

Here are 3 key benefits of Feature Flags related to app upgrades and additions.

The impact of feature flags on the mobile app development process is huge. Thanks to them you can be in total control of the development and deployment process. Feature flags beside making the deployment easier, also help you fine-tuning the app on a continuous basis on the basis of user feedback.

After all, a mobile app development project is very cost-intensive now. In a highly competitive scenario, you just cannot take users for granted. Your development and coding decisions should be very well informed about the user feedbacks. Feature flags allowing partial release for some users or by offering total control to release and withdraw a feature actually reduces the risk of faulty development and feature releases. Thanks to feature flags you can always make your best output available to the users.

Just like the increasingly impatient users, the mobile app development market is now driven by pace and efficiency. Releasing early has a more competitive impact than ever before. Thanks to feature flags you are in total control of the app release and not a single faulty feature can delay your release. You can always withdraw a feature and make it available later after making it better and perfect. You do not need to submit time-consuming upgrades for the lengthy review process. You can just incorporate instant changes whenever you wish.

Incorporating user feedback in the development process is no longer just an option, it has become a necessity for apps that want to enjoy continuous engagement and steady business conversion. Feature flags allow you to remain completely updated and informed about user feedbacks. You can always release your new app feature for a small subset of users and based on their feedback can make the same available for the wider audience. Such informed development and deployment are likely to impact user engagement and business conversion positively.

Every digital product invariably needs to go through reviews and testing processes for validation and credibility. Companies generally do A/B testing to get feedback about their app. They do it by releasing different versions of the same app for different audiences. The output of such testing helps them getting relevant insights about the different variants of the app and their varying impacts on users. Cumulatively after considering the pros and cons of each aspect against the feedbacks, they decide about the final app version for release.

Now, Feature Flags helps this testing process in more precise and effective ways. Feature Flags offering total control over release and deployment actually does A/B testing under the hood. You can release the same app with variants created for different user subsets and evaluate the results.

The Role Of Feature Flag In Continuous Development

Feature flags help to create different variants of the same app and simply on that account, it helps to get feedback easier than ever before. Instead of providing results from a simulated test environment, it helps coming out with actual user feedbacks.

The user feedbacks and performance test of a different set of features cumulatively deliver more useful and effective insights about how the respective app can be fine-tuned and optimised for user experience. This provides the scope of continuous app development. Thanks to feature flags you can often evaluate, test and come with improved features for a better app.

Do you want to know how to use feature flags for your next mobile app development project? Do you want us to guide you through the entire process of development and release? Please reach us by dropping a message and we are going to respond at the earliest.