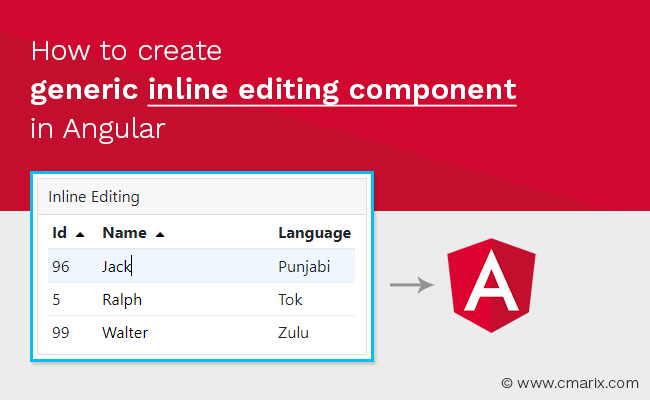 Angular is a popular framework that allows programmers to focus simply on building JavaScript classes. It is developed over Typescript with comprehensive support of ECMAScript 6 standardization which in-turn provides solutions on complex front-end application for large projects. Angular provides benefits like effective templating, lazy loading, simple API and many more.

Angular is built around the idea of components, and prominently with the web components standard in mind. Angular gives a cutting edge to the web applications using the default features it offers for achieving the best execution. Additionally, it allows you to logically design and arranges your application in components instead of controllers. Creating a library for extremely generic components which are used throughout an application makes sense when you consider reusability, versioning, separate maintainability or even making it public to support the community. These are the reasons why Angular has a Component Library for web applications where you can include components and generic controls which you can reuse relatively often throughout the web application. Inline editor is one such library of Angular.

Read More: 9 Ideas For Angular That Are Often Overlooked by Developers

Inline editor is a library of Angular that allows you to create editable components. Such technique is also known as edit-in-place or click-to-edit. Inline edit allows the user to edit text directly on the page without requiring going to a different page. It makes the interaction more direct and built-in as the users can edit the text in the same place where it appears. It allows users to select portions of rich text that they wish to edit in a webpage, rather than loading a specific new page.

For creating general inline editing components in your web application you can refer the steps given below:

In the given code, you need to specify that when detail label is converted into control, you have to define Click event. By using this Click event outside of Control you can convert editable view into detail view.

Angular offers completely diverse approaches to web development from start-ups to Enterprises. It’s a new incarnation of a widely used framework that aims to simplify and streamline the way to build apps with JavaScript. Customers want and expect compelling user experiences using these web applications. It means that businesses need to be incredibly responsive and innovative to fulfill their customer’s needs. Additionally, Angular has emerged as a robust development framework that allows Organizations to not only keep pace with customer expectations but also expand into new business avenues and simultaneously maintaining the current performance.