Android vs iOS Development: Which App Development Platform Is Better in 2023? 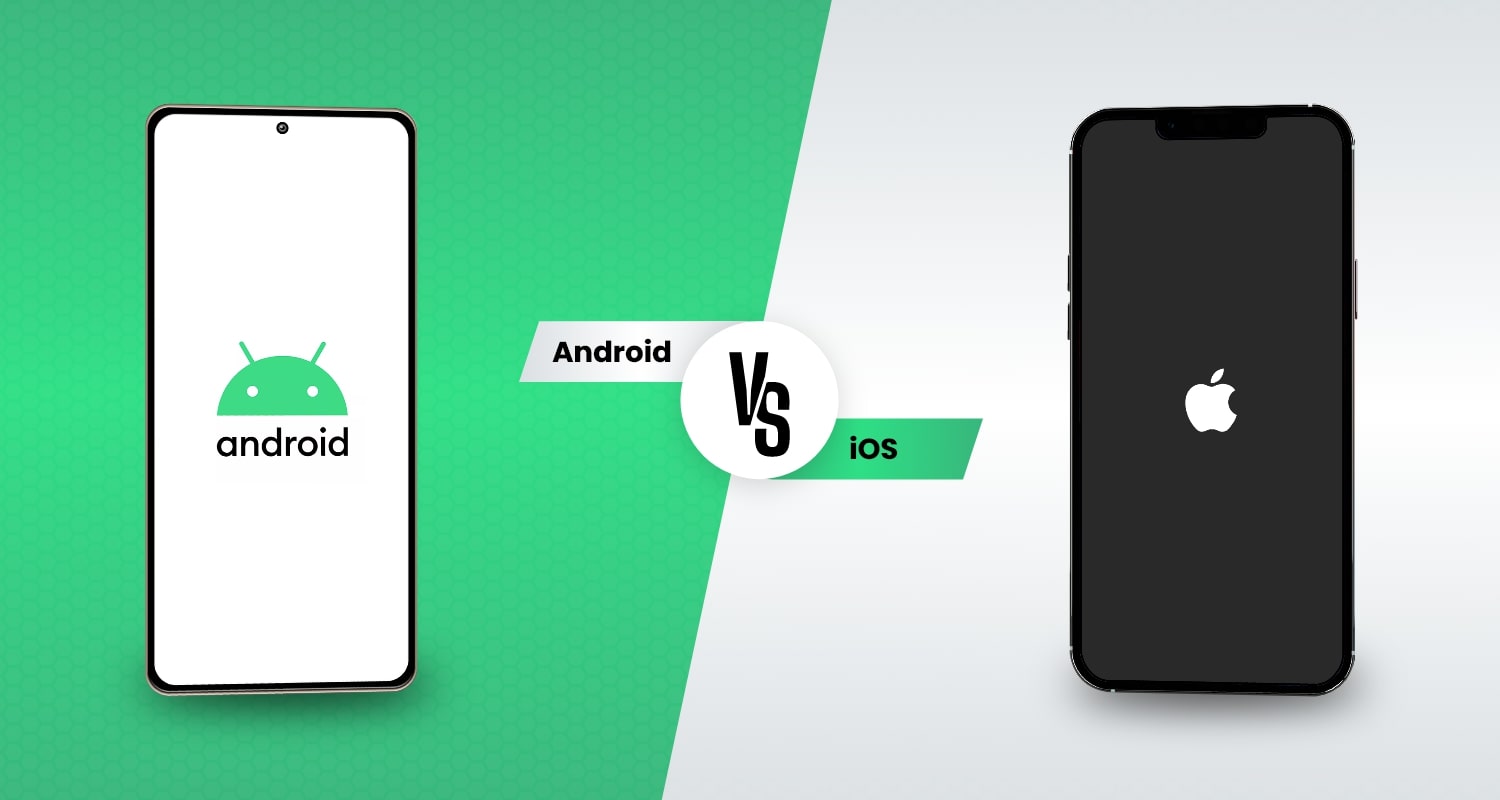 Unlike the traditional way of growing business, companies are now relying on using mobile apps. A recent study shows that there are nearly 3.5 million and 2.25 million apps available on Google Play Store and Apple Play Store respectively for the users. This is the reason why the majority of businesses are looking to develop a robust mobile app to help their brands stay competitive in the market. But, when it comes to developing a mobile app, business owners find it difficult to decide what platform they should choose between iOS and Android to develop a mobile app. It is because each platform has distinct advantages. Here comes the role of a leading mobile app development company that can help you make the right choice between iOS vs Android Development.

Here is a comprehensive guide for iOS vs Android mobile app development by considering several parameters such as current market trends, user retention, app revenue, numbers of users, and several others that would influence your decision.

Android vs iOS: A Detailed Comparison

Let’s look at the basics of the iPhone vs Android app market scenario to get a clear understanding of how these two app stores perform on an individual level:

The differences in the users’ iOS and Android are noticeable. So, when it comes to choosing your ideal mobile app development platform, make sure you define your app development goal and target the right audience through your app. Let’s go deeper into the topic. Android has the greatest market share as compared to iOS.

The latest report shows that while Android pulls more downloads, iOS users tend to exhibit higher engagement rates by spending more on the app and in-app purchases. Again, Android has achieved immense popularity in the lower-income and developing countries, on the other hand, iOS users are mainly younger and have higher incomes and more education. Simply put, Android captures the attention of the mass.

Estimating the total number of users on each platform is calculated to measure the global market share of both these platforms. This prominent difference in of Market Share Android vs iOS makes Android a preferable choice for startup businesses. From the very launch of the iPhone till today there are around 1 billion users globally. But, Android maintains the top-ranked mobile operating system in more than 190 countries with over 2.5 billion active users.

So, based on the global market share, Android wins the battle. This is the top reason why startups always opt for Android App Development Services to make an entry in the mobile domain for the first time

When it comes to choosing a mobile app development platform, app revenue is one of the significant deciding factors. According to a report, Google Play generated 12.1 billion US dollars in revenue in 2021 with 27.6 billion app downloads. Whereas, Apple App Sore accumulates 21.5 billion US dollars with just 8.1 billion downloads. This is a clear indication that Apple’s App Stores has a significant lead in revenue.

Thus, Apple has over time achieved the top position as the mobile app development platform that businesses choose to generate more revenue. Though Android developers are working restlessly to catch up with their monetized apps, still it will take time to beat the Apple store level. So, if you are focusing on generating more revenue from your business, make sure you hire an iPhone App Development Company.

User retention number indicates whether your app is performing well or not. It is because several factors can lead to a soaring app uninstall rate. If you are looking to run an app-centric business, it is important to build a loyal customer base. But many businesses find it difficult to achieve this in such an overcrowded market. But studies show that Android customers have been more loyal to Google’s mobile operating system as compared to iPhone customers. On the other hand, Apple users are less reliable and they leave the app very soon even for minor issues.

So, if you are wondering about which one to choose between Android vs iOS Development,  the Android app development platform can help you maintain a good user retention base.

Are you a startup wondering about Android vs iOS Which Is Better? Then there are several factors to consider while making the choice. Now, let’s look at some deciding factors while going with the first mobile app launch.

Around 80% of the world’s mobile app market is largely dominated by Android. Only there are some revenue-generating nations like the USA, Japan, and Australia that come under Apple’s dominance. So, while developing a mobile app. Make sure you consider your target location.

When it comes to choosing a mobile app development platform, you must go beyond geographical borders as several other factors make difference between Android vs iOS Market Share. Studies prove that iOS users are economically and academically stronger than that Android user making them more engaged with the app. On contrary, Android users generally belong to the 25 to 45 age group and are considered the late technology adopters.

So, if your business targets a specific audience base with higher qualifications and income, you must choose the iOS app development platform.  But when you are targeting the mass,  make sure you Hire Android App Developers without any hesitation.

Do you have in-app purchases at the center of your app’s business model? Then you must consider iPhone operating system. It is because iPhone operating system is more cost-effective than most Android operating systems. Simply put, iOS developers can build apps most cost-effectively because of its Swift coding language. The Android developers need to pay a single-time fee of $25 to launch an app on the Google Play Store. But, Apple developers pay a recurring fee of $99 and $299 per annum for working individually and for iOS development companies respectively.

iOS and Android both come with distinct benefits. For instance, Android OS is open-source is easy to add new features and make customizations to the UX. But it also makes Android OS vulnerable to security threats. On the other hand, Apple is a safer operating system for building an effective mobile app with money transaction facilities and the exchange of sensitive data.

So when it comes to Android vs iOS Security, developers choose the iOS operating system. It does not mean that Android OS is completely unsafe. But it is important to check the apps and make them compatible with different handsets to be safe on Android.

Differ depending on the frequency of their updates. An iPhone app offers frequent updates, whereas Android apps may not be easy to update. It simply means that iOS developers can easily support the new iOS version making it a popular choice for business.

Google has developed a partnership with numerous device manufacturers making it possible for your Android app reach to a variety of devices. It is only possible because of its fragmentation. It refers to such facilities when some users can run apps on older versions of OS whereas some others can run apps on newer versions. But Android fragmentation has both advantages and disadvantages, but most importantly an Android app can take you to the masses as contrary, unlike iOS.

Though app designing and development mainly depends on the skill of developers, but still the platform influences the overall functions. So, whether to choose iOS or Android for startup app development largely depends on design and development facilities. IN General, the iOS programming language is considered easier to learn than those Android.

Developers find it easy to code in Swift as compared to Java. For designing, both these two platforms follow the core rules of software design, but the difference lies in their way of navigation and content organization.

SEE ALSO: How to Build an iOS App?

There is no denying the fact that these two mobile operating systems are different from one another in terms of development, design, environment, complexity, and even marketing strategy. Let’s go deeper with these points:

One of the biggest dissimilarities between Android development and iOS development is the technical side. They both utilize different technology stacks. Whether iOS has Swift proprietary language, Android relies on Java and Kotlin for app development. Coding in Swift is considered easier and less time-consuming. So, when it comes to programming language, iOS is preferred by the developers.

The basic difference between iOS and Android design systems lies in their navigation and architecture organization. Developers consider the iOS app easier to develop by system design.

Android app development is more complex than iOS app development. It is because Android has a lot to do with device fragmentation as compared to Apple which releases a limited range of devices.

There is no denying the fact that quality assurance testing of applications is important for developing a mobile app. It is important to make your users ensure that your application works perfectly. You can make this possible using an iOS simulator and an Android emulator for iOS and Android respectively. The iOS simulator is faster than the Android emulator, but the Android emulator is more powerful than the former. Generally, the iOS simulator often fails to offer realistic software simulations of Apple devices. So, when it comes to testing a mobile app, Android app testing demands more time and effort than iOS.

Creating visual contrasts using XML documents is the same on both of these platforms. But, the iOS animations are superior to Android as Apple consistently focuses on better user experiences with complex and amazing animations. Whereas Google largely focuses on hardware.

When & Why Should Businesses Need to Choose iOS App Development?

Now the question is when and why businesses especially startups should choose iOS app development. Well, it depends on the goal and requirements of your business. There are some cases when you must consider Apple developers including:

Developers prefer to go with iOS app development if-

In the comparison of iOS vs Android it is important to go through your business goals, needs of your targeted audience, development cost, and time along with its possible obstructions before starting your mobile app development process.

Nowadays, businesses are looking to make more money by utilizing cross-platform app development instead of considering iOS vs Android. It is an effective source of making good money. The main reason is that cross-platform helps in developing an app in less time and investment.