BLOG
How to respond to Mobile App reviews 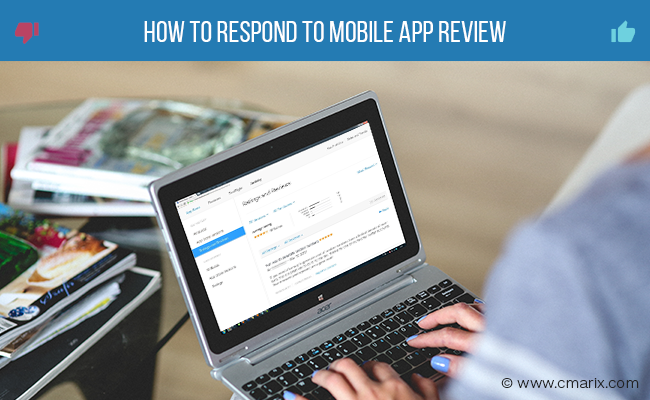 How to respond to Mobile App reviews

Application Stores are truly mainstream today as users look to download different mobile apps and developers utilize this platform to launch their product. Different mobile platforms such as iOS, Android, & Windows have their respective app stores and each of them differ vastly from the each other in terms of pricing, billing, presentation, and support. Even each store rates the same application in different ways, which may finally get the customer in knots about whether or not to purchase a certain app. App reviews have a huge importance in the app stores and in App Store Optimization (ASO) thereby playing a crucial role in the success of any good mobile application. As an app developer or marketer, positive reviews are always encouraging. On the other hand, negative reviews can be difficult to deal with and may impact overall brand strategy as well as the success of your mobile application.

With release of iOS 10.3, Apple has made a significant improvement to how its App Stores works. Finally, Mobile app developers can respond to user reviews in order to offer support, ask follow-up questions, or generally interact with their app’s customers. Developers are also able to request customers to give App Store ratings and reviews while using an application, allowing developers to get quick feedback without requiring a customer to switch over to the App Store. Better rated apps will get more downloads and then move up the charts on the App Store.

With the launch of the new feature, Apple offers recommendations on how developers should respond to reviews. It clarifies that auspicious, clear and concise answers are ideal, and they should reflect the tone of the brand – regardless of the possibility that multiple people write the responses. Responding to reviews and being engaged with users is a great practice. There are some obvious and quick outcomes that you will notice. A potential user always checks the reviews and ratings of an app before downloading it.

While it is challenging to reply to every negative review and convert it to a high star Positive review. Always try to reply to reviews where a user is complaining about a crash or any other behavior that is not intended. While your attempt to make the application as profound as possible, there is always a chance that some people may not notice features that are already available. Reply to such reviews with guidelines and you are quite often ensured high star revised review. Some reviews provide amazing feedback to developers. Recognize such reviews and acknowledge that you have read and understood the feedback.

App reviews is a very objective feedback mechanism that provides a real response from the users in terms of the value addition of the app. A good developer should always aim to launch a mobile application after complete QA process to ensure that it doesn’t have any obvious issues like crash, performance issue, memory eat up, logical mistakes & others. One should always aim to keep away from negative reviews completely and if still received, attempt to understand the causes behind these bad reviews

App reviews are extremely important in terms of App Store Optimization, because it is one of the core elements of the app store algorithm and effect applications’ rankings. Generally, this approach will lead to a more reliable portrayal of app quality and usefulness. It is important to focus on gathering positive reviews as negative reviews are certainly not pleasant to receive. Not only do they affect your app store visibility and discoverability, they could likewise discourage users from downloading your app. Working on the negative ratings is a step further that can lift your retention rate in the App Store. Developing an app is a vital part of any business but to maintain that app is more important. So this approach you could use to make the app successful and maximize your ROI. Well rated app in the app store can drive major success for your business if managed it the right way.