BLOG
Enterprises Are Developing Their Business Apps Using Node.js, Why Aren’t You? 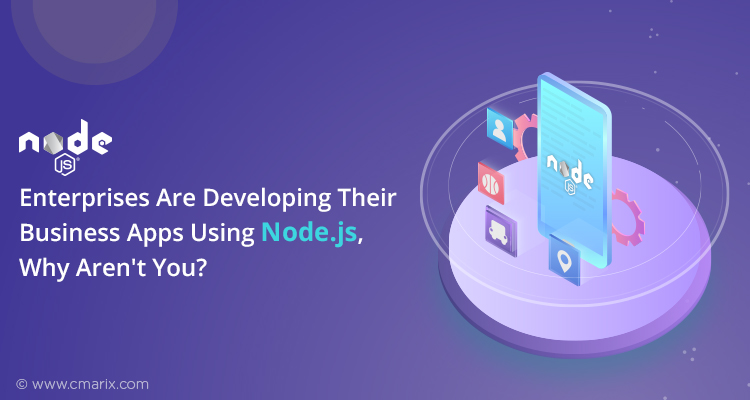 Enterprises Are Developing Their Business Apps Using Node.js, Why Aren’t You?

The increased prominence of JavaScript has significantly changed the face of web development today. Several years ago, it was even hard to imagine things which we can do using JavaScript effectively running in the browser as well as on the server. Server-Side platforms have created a ton of buzz, offering benefits like performance, faster development, and different advantages. The selection of the right platform for your web app development services depends on different factors including adaptability, speed, support, community, and some other. In consideration of all these imperative factors, Node.js is leading and no wonder that most startups give a distinct preference for it.

NodeJS Development among all JavaScript frameworks has gained unprecedented popularity ever since the very beginning. Is it not usual for a technology to get popular that has been embraced by most of the business giants for their apps? Well, Node.js has now the distinction of being the popular framework used across leading apps including PayPal, Uber, Walmart, NASA, Netflix, and several others. Here through the length of this blog post, we would try to understand the reasons behind this unprecedented popularity.

“Node.js has now the distinction of being the popular framework used across leading apps including PayPal, Uber, Walmart, NASA, Netflix, and several others”

Node.js running on the V8 engine from Google and being written in JavaScript offers unmatched speed. It is capable to run the program code much faster. If you want to build a fast-paced app involving a complex set of functions, Node.js is the ideal language to opt for.

Node.js being equipped with the Node Package Manager or NPM that includes as many as 50,000 packages is ideal for developers to build any type of app. The robust package manager helps developers to work in a collaborative environment with active sharing.

In Node.js both the HTTP requests and responses are actually considered as isolated events and the files can even be processed when they undergo processing. This reduces the processing time to a great extent and makes data processing possible without any delay.

Node.js is also capable to work as a proxy server and this allows a streaming number of services with a variety of response times. Whenever the proxy infrastructure will not be available with an enterprise, the proxy server of Node.js can come to rescue.

Node.js is a great framework with a single codebase for both server-side and client-side coding. This helps to synchronize data between two servers effortlessly and thus saves a lot of development time.

Node JS is a great framework for solving various database queries. When working with the Node.js the web developers no longer need dealing with the differences in syntax.

“Netflix is the leading video and media streaming app with 93 million subscribers across the globe. This gigantic app that needs to push fresh packages frequently depends on Node.js”

As we have already said many leading businesses and their popular apps use Node.js. Apart from proving credibility and potential of the framework, all these apps also show how Node.js can be actively utilized for a variety of scenarios, contexts and business benefits.

Netflix is the leading video and media streaming app with 93 million subscribers across the globe. This gigantic app that needs to push fresh packages frequently depends on Node.js. By using Node.js they also could reduce the startup time to a minimum.

PayPal is the world’s leading payment gateway solution. PayPal now has built their entire backend with JavaScript, Java, and Node.js. Earlier when coding separately for the web server and the app, they faced multiple issues. After embracing Node.js all their issues were solved.

LinkedIn, world’s most popular social networking app and portal for professionals, businesses and job seekers also built their app with Node.js. Ever since LinkedIn moved to Node.js for their backend, the app became several times faster.

One of the world’s most popular online publishing platform Medium also depended on Node.js for improving on functionalities besides appearing as a simple and single page web interface.

eBay needs no introduction as one of the leading online marketplaces and eCommerce stores. When trying to build a high-performance eCommerce app with robust real-time capability they depended on Node.js. Today eBay can allow a whole range of fast performing eCommerce-specific services thanks to Node.js.

NASA, the world’s most respectable space research organization uses Node.js for availing the benefits of real-time communication across locations. NASA adopted Node.js mainly to decrease the procedural steps to a minimum while rendering services.

This popular app representing the virtual marketplace of online deals and coupons depended on Node.js when rebuilding their website which was facing some performance issues. Groupon website has also become one of the biggest Node.js projects to date.

Walmart, the undisputed retail chain and eCommerce service also adopted Node.js to rebuild their web and app layers that have been subjected to data leaks. Walmart Store embraced Node.js as a scalable solution for the large volume of data they need to work with.

These instances of Node.js deployment for successful web and app layers represent only a partial spectre of the whole story. The node.js framework is also used actively for global services and brands such as Google, Yahoo, GitHub, Mozilla and many more. In the time to come, we can expect more global brands and services to embrace Node.js for their applications.

If you are looking for reliable Node.js Development Company for your business app then definitely Contact us or email on [email protected].