As the mobile app industry is growing at a rapid rate and as there are no signs of slowing down in the near future for the app industry, a speedier development process has become a cornerstone for mobile app development services. In spite of the growing demands of the mobile apps among businesses who want to shape their mobile presence, the crucial aspects like development costs, data security, quality of code, and app maintenance cannot be left on the backburner. DevOps is the development approach to mitigate these quality concerns with the pace of development.

What Exactly is DevOps?

DevOps is a unique app development approach that brings together the collaborative inputs of all the stakeholders and developers involved in building an application product. The approach mitigates the collaboration of developers from multiple disciplines within the company including project managers, app developers, and operation staff members.

Thanks to DevOps, for businesses it has become a lot easier to work on business objectives all through a project and deliver greater value to the customers. This is why embracing DevOps approach in app development is so much beneficial. This also helps businesses to ensure a better return on investments through their app projects.

Various studies confirmed the benefits of a DevOps approach for businesses. Some reports suggest that organisations that used the DevOps development approach garnered a 63% more positive experience for their software quality. The same reports also suggest that 63% of these businesses by implementing DevOps can release new software applications more frequently.

How to Implement a DevOps Approach to Your Business? 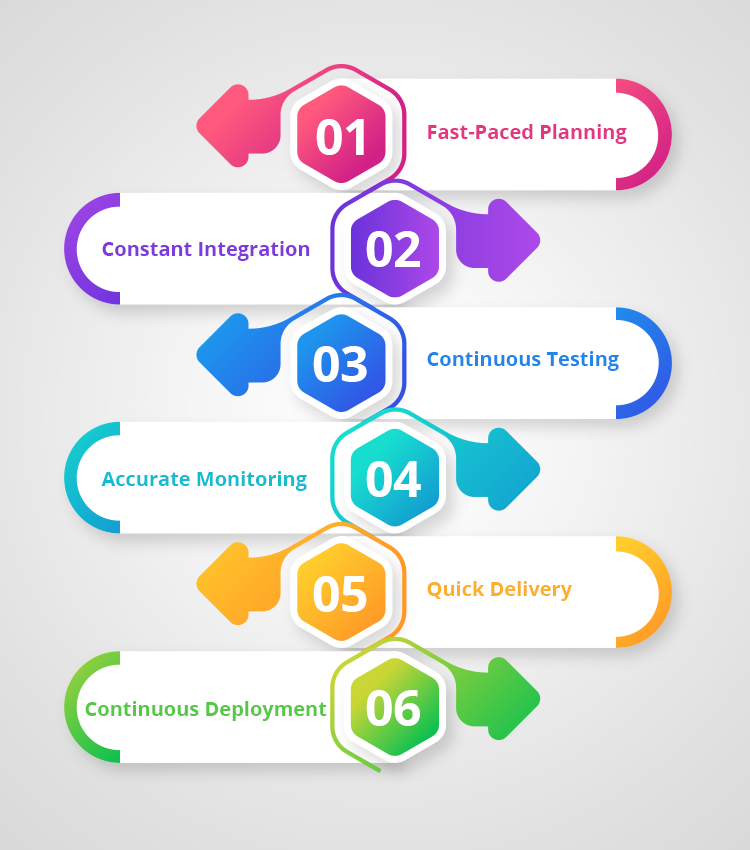 Mobile apps are designed and developed for comparatively smaller screens with different outputs of touch as compared to web applications. Additionally, this needs to be implemented using a few tactics known as the basic thumb rule for adapting to DevOps in business. An Android app development company adopts DevOps in their development process in many ways.

Here is an example of the programming languages that are essential for the success of DevOps.

Thanks to DevOps approach you can now bring your entire team of developers, testers, BAs, and operation staff for evaluating the scope of the mobile app along with a detailed plan for development and implementation tasks.

This phase in the DevOps development process actually focuses on following the best development standards and practices as established by the community and the version control protocol.

This crucial step in the custom software and mobile app development cycle focuses on ensuring the app quality through continuous testing at different phases of the development process.

This is the phase of the development process ensuring the performance of the mobile app as per the requirements by continuously evaluating the changes and the deviations.

This practice in the DevOps approach ensures making the source code ready for deployment in a production environment by assuring that the changes fit into a production-like environment.

All changes that go through the automation testing needs to be automatically deployed to the production environment and this process ensures that. Here are the 3 key steps for implementing DevOps in the mobile app development process.

For mobile app development projects, a number of aspects pulling down the app performance or app output should be taken into consideration. From different screen size, resolution, capabilities, features, and various aspects of each mobile device need to be considered.

This is where the importance of mobile app testing stays out. The app testing instead of taking help from emulators and simulators should be done in real environments. Mobile app testing throughout the project needs to be carried out on a continuous basis on the actual devices and using a similar infrastructure where the app is going to be deployed. This stage in a DevOps approach by embracing automated app testing makes the app development process better to clear the app from bugs and various issues.

DevOps by its integrated process comprising various niches also gives too much importance to validation and measurement of various code parts in the app and takes care of it right from the distribution. The quality assurance process continuously tracks the ratings and feedback received by the app on the Mobile App Store. This helps in detecting the bugs and making way for subsequent changes and growth.